A worthy digital camera will allow you to capture in RAW mode, an image file format that contains 100 percent of the data your image sensor captures. RAW images do not lock in a particular white balance or color space but take up much more space than JPEG (JPG) compressed images. When your digital camera creates a JPEG, some of the image details are lost in the process. A JPEG conversion commits to tone and contrast adjustments based on a best guess of what image information is important. This results in lost detail in shadows or highlights, color shifts, and loss of color information. The camera’s conversion to JPEG also makes assumptions about sharpening and noise reduction, both of which alter fine details and cannot be undone. You may be satisfied with the JPEGs your camera produces, especially if it’s a high-end camera and you are careful to light and expose your shots correctly, but you will have more latitude to correct minor imperfections or otherwise improve on an image by shooting RAW.

If you shoot in RAW format, you have some options to control contrast in Camera RAW Import in Photoshop (You can also use Lightroom, GIMP, or other tools).

The above is an excerpt from True Confessions of Nude Photography.

If you are serious about your photography, shoot in RAW format. Your images do not record color data, at least not as you would think of it. They just have the electronic data from the image sensor, three grayscale images of red, green, and blue. Therefore, they are not sRGB or aRGB. There is no color space associated with a RAW file. Color space only comes into play when you open the file in image editing software and a profile is assigned to it.

So what if you do not want to agonize over all of that? Well, many photographers deal with their images in sRGB, ignore other color spaces, and never look back. If you are not much of a perfectionist, you probably will not even notice the difference. What you see is what you will get. Plus, you can always learn color management later when you want to hone your skills.

I recommend that you shoot in RAW mode so the white balance and other settings can be decided later after you finish shooting.

The above is an excerpt from Exquisite Curves. 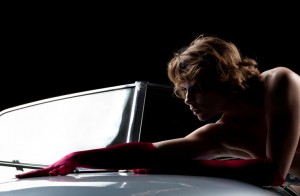 Nude photos, like fashion, can present a challenge to getting crisp shots. The model moves, the pose is fleeting, and you may frequently change camera position. All these factors can lead to motion blur. The first ingredient to sharp photos is to have plenty of light. This could mean shooting with daylight or powerful studio strobes. A large quantity of light allows you to use a smaller aperture, yielding a sharper result from your lens.

In daylight, more illumination translates into faster shutter speeds for stopping motion. To avoid camera shake indoors or out, you should use a tripod (also see “Available Light”). In the studio, stopping motion depends on flash duration. If you are accustomed to camera-mounted flashes, you may think that all flash lighting will freeze motion. However, once you begin to use more powerful units, you will find that the flash duration can be as slow as 1/100 of a second. This is not fast enough to freeze quick action such as a model leaping into the air, dancing, or flinging her hair. Flash duration is measured in terms of t0.5 and t0.1, being the time required for the strobe to emit 50% and 90% of its light, respectively. For example, a flash may have a t0.5 of 1/1000 of a second and a t0.1 of 1/300 of a second.

The number you want to pay attention to is t0.1. Unfortunately, many manufacturers only state t0.5, do not indicate which measurement of duration they are using, or omit the information altogether. I recommend a t0.1 of no longer than 1/500 of a second if you are planning to photograph a moving model. If the manufacturer does not specify that the stated duration is t0.1, you can look for a duration of 1/1500 of a second, and assume that this is the t0.5.

As if that was not complicated enough, there are some more twists. Each flash’s duration is affected by its power settings. The advertised action-freezing duration is usually at the unit’s lowest power setting. If you are working with a wireless transmitter, you will be limited to the sync speed of the transmitter, which could be lower than that of your camera. On my website (www.nudephotoguides.com/resources), I include some specific equipment recommendations. To find the sweet spot of your lens, take a variety of shots at varying settings. After you determine the sharpest frames, look at the shutter speed and aperture settings that are recorded in the EXIF data.

A few flash units I’ve found that achieve fast flash durations and respectable power output. Many of these can be purchased used for those on a lower budget.